Absolut-ly Fabulous Card – Shaped Like A Bottle of Absolut!

From the first time I saw the TV show Absolutely Fabulous, I fell in love with it! If you aren’t familiar with it, Absolutely Fabulous, also known as Ab Fab, is a British sitcom created by Jennifer Saunders, based on an original idea by her and Dawn French, and written by Saunders, who plays the leading character.

According to Wikipedia, the series features Saunders as Edina Monsoon, a heavy-drinking, drug-abusing PR agent who spends her time chasing bizarre fads in a desperate attempt to stay young and “hip.” Edina is joined in her quest by magazine editor Patsy Stone, her best friend and enabler, whose drug abuse, alcohol consumption, and promiscuity far eclipse Edina’s comparatively mild self-destructive behaviour. 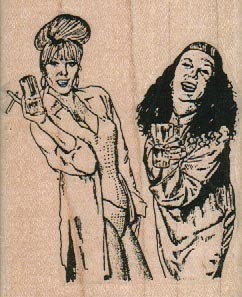 The stamp, Party Girls 2 1/2 x 3 #183, from Viva Las Vegastamps!, immediately reminded me of Patsy and Edina. I decided to use this stamp, along with a bit of a play on words and a card shaped like a bottle of Absolut Vokda, to create a card that’s perfect to tell someone you think their fab-u-lous!

I started by creating the card base using the Zing electronic cutting machine. Using Make The Cut!, I traced the silhouette of a bottle of Absolut, copied it, and then welded the two shapes together along the side, to create a bottle shaped card, sized to fit in a #10 envelope.  I cut out a single bottle shape in vellum to use as an overlay on the front of the card (to resemble the frosted glass of the bottle). I cut the cap out of paper covered in aluminum tape.  The lettering is the font Futura Extra Black Condensed BT, which is pretty close to Absolut’s lettering style.

I stamped Party Girls 2 1/2 x 3 #183 on white paper, colored them with Copic markers and fussy cut them out.

To make it look like the bottle contained liquid, I masked off the top of the bottle and used distress ink to shade from the neck down.

To assemble the card, attach the aluminum cap and letters to the vellum. I ran the pieces through my Xyron to turn them in to stickers. Then, attach the vellum to the front of the card using Miracle Tape. Only use the tape behind the letters and cap so it doesn’t show through the vellum.

Lastly, apply the party girls to the front of the card with Miracle Tape. Your done! The card is shown here resting on a red background so you can really see the shape.

Check out the other great projects from the Viva Las Vegastamps! Design Team on their blog.