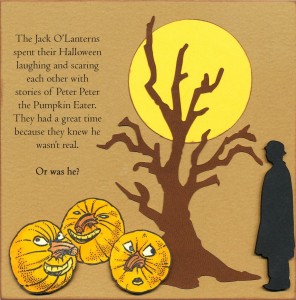 Halloween, my favorite holiday, is almost here! For this weeks post, I made a cute card using three different pumpkin stamps. To start out, I stamped the three stamps on white cardstock, and colored them with Copic markers. I cut out all three of them. One of them includes a graveyard scene in the background, but I cut that off so that I would just have the pumpkin by itself.

For the sentiment, I wrote my own, and then printed it directly on a 6”x12” piece of the light brown cardstock. The font is called Centaur, and I thought it looked like a good storybook font. Be sure to click on the pictures to enlarge them for easier reading. For the tree, I cut some dark brown cardstock with a Tim Holtz Sizzix die. I cut out a silhouette of a man to use for Peter Peter the Pumpkin Eater.

For an added Halloween bonus, I am posting a second card that I made for Viva Las Vegastamps! ad in Rubber Stamp Madness magazine. 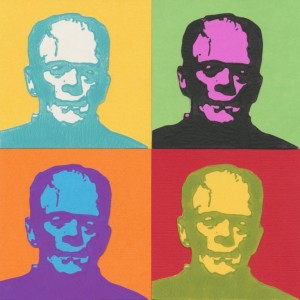 For this card, I used Frankenstein stamp #5842, some colored paper and acrylic paint dabbers from Ranger. To start out, I cut eight colored squares of paper about 2.5”x2.5” I adhered four of them to the front of a 5”x5” card.

I stamped on the four remaining squares using paint dabbers instead of ink my stamp. I stamped blue paint on the greenish white square, black paint on the purple square, purple paint on the blue square and green paint on the yellow square. You can do it any way you like. I then cut out my monsters and adhered them to the squares on the card in the order I liked best. You’ll want to wash your stamps ASAP when using paint. I doesn’t hurt them, but the longer it sets, the harder it is to clean.

Be sure to visit the Viva Las Vegastamps! blog to see what the rest of the design team have created for Halloween! There are lots of great ideas this month!