I’m not much of a scrapbooker. In fact, I’ve only done one scrapbook! I just can’t seem to focus on documenting my photos and experiences. I know I should, but it’s just not for me. I do love making home decor pieces though, and I especially love “altering” something – changing something from one thing in to something else. And that’s the first thing that came to mind when I saw the Sprightly Sprockets Chipboard Album from Want2Scrap. 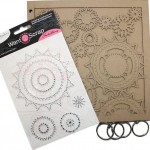 The cover is a collection of sprockets with space between them, so you can see through the openings to the full size page below. When I saw the cover I immediately thought of a clock. Not just any clock, but a clock with a pendulum… and someone to maintain the clock. That idea became the Steampunk Clock with Clock Keeper that just recently appeared in Scott Publication’s Just Steampunk Volume 2 magazine (Oct 2012).

I wanted to give the clock a solid feel and covering the sprockets with metal foil would do just that. Cutting out the shapes was a breeze, since Spellbinders’ Sprightly Sprocket Dies match the sprockets on the cover of the album perfectly. I had some metal foil but wanted a bit more variety. That’s where my friend Shirley stepped in. She had metal mesh and kindly gave me some!! 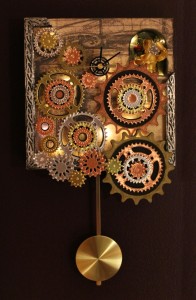 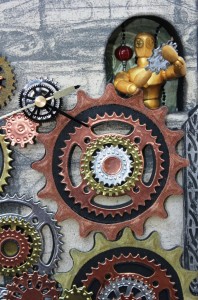 When I saw the mesh, I started to think about how cool it would be to see through the mesh to the background. Better still, what if there were lights behind the sprockets! A string of tiny battery operated LEDs from a party supply store would work just fine.

I wired the LEDs underneath the sprockets and now the clock could be turned on at night. Tiny lights would appear behind the sprockets to give off a soft glow. There could even be a light in the Clock Keeper’s apartment!

There’s even a little Want2Scrap bling decorating the wall of the Clock Keeper’s apartment.

Here are the basic steps I followed to assemble the clock. If you have questions or need a bit more information, please reach out to me. I’m happy to help. You can connect with me on my facebook page at www.facebook.com/createNcraft. 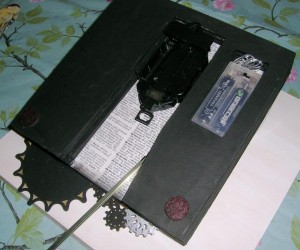 Next time you see a chipboard album, maybe you’ll look at it a bit differently. It could be a clock or a wall hanging or who knows what! I’ll be posting another “album turned in to home decor” project later this month, so stay tuned!