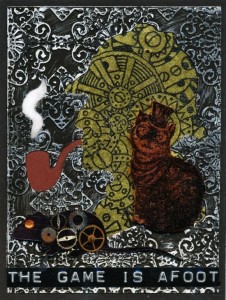 Are you familiar with steampunk? It’s a style that involves a setting where steam power is still widely used—usually Victorian era Britain or “Wild West”-era United States—that incorporates elements of either science fiction or fantasy. Works of steampunk often feature anachronistic technology, or futuristic innovations as Victorians might have envisioned them.

Gaslight romance or gaslamp fantasy is an offshoot of steampunk. Steampunk stories are most commonly set in a romanticized, smoky, 19th-century London, as are gaslight romances. But the latter category focuses nostalgically on icons from the late years of that century and the early years of the 20th century–on Dracula, Jekyll and Hyde, Jack the Ripper and Sherlock Holmes.

This card is inspired by Sherlock Holmes and his quote, The game is afoot!, from the The Adventure of the Abbey Grange. The same way a cat might chase down a mouse, Sherlock Holmes would chase down his quarry. Here’s how I made this card. 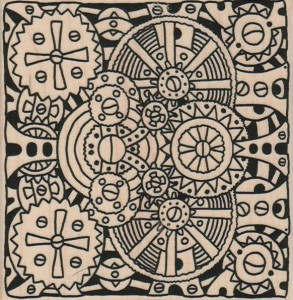 The background is dry embossed aluminum that’s been painted black and then sanded to highlight the embossed design. The silhouette of Sherlock Holmes was cut out using a Zing electronic cutting machine.

Brown paper and a cotton ball were adhered behind the background to form the pipe and smoke.

The silhouette is filled with gears, using the Steampunk Background 4 x 4 #16468 stamp from Viva Las Vegastamps! It was stamped on metallic gold paper using StazOn ink. 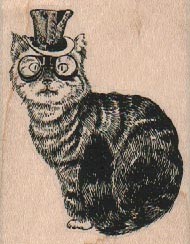 The mouse was cut from metallic black paper on the Zing and then filled with small clock gears.

The quote was created using a vintage Dymo label maker.

I hope you enjoyed this card and learning a bit about steampunk and gaslight romance. For more great projects, check out the Viva Las Vegastamps! Design Team blog.